Find membership options and join us today.
Buckinghamshire Gardens Trust > Our News > Is it a mount, or a mound or simply a planner’s folly!! 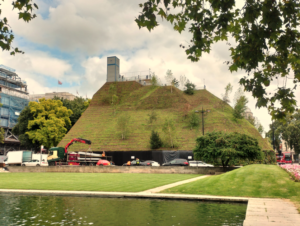 “There’s nothing like a good view, and if you don’t have one naturally why not create one? Don’t have high ground? No problem – create it artificially. ” (David Marsh)

On a recent trip to London, I found myself at Marble Arch and was very surprised to see a new tourist attraction situated next to the historic arch. Some how all the recent publicity about its creation had passed me by, however I immediately googled it on my phone to find out more. The mound was the brainchild of Westminster City Council who had the idea to build a temporary structure in the style of a mount evidently without going through the formal consultation process. 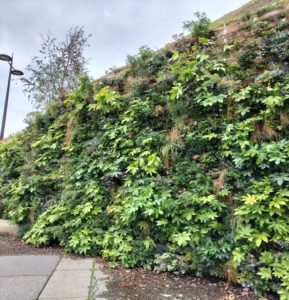 It is constructed on a 25-metre-high frame which is covered in sedum turf, with a few trees doted about and surrounded at the base by a ‘green wall’, there are stairs to the top so the public can admire the somewhat limited views. From a distance it looks solid however as you get nearer it obviously has suffered from a number of issues, the difficult weather conditions and the fact that it opened before the plants had bedded in. However, the problems are not just practical, but there are less obvious political and financial ones too, not least its spiralling cost at 6 million pounds, and the controversial construction resulted in the resignation of the deputy chair of the city council.

The idea was to charge the public to climb the mount to recoup the costs and thus encourage people back into the West End which has suffered considerable financial problems during the Covid pandemic. Unfortunately, this back-fired nobody was prepared to pay and the attraction is now free, yes people are visiting curious to see how bad London’s ‘worst attraction’ actually is, it has even become known as ‘Telly Tubby Hill’.

Mount (definition from Michael Symes Glossary of Garden History)An artificial hill to provide a good view, popular in Tudor Gardens. One of the few surviving examples is the mount at New College Oxford built in 1529. Mounts could be quite large up to 10 metres in height, Francis Bacon was an admirer of them. By the early eighteenth century there was one in Kensington Gardens which was subsequently planted up for emphasis.

Unfortunately, Buckinghamshire is lacking in examples but across in Northamptonshire Lyvden New Bield has several snail mounts and the one at New College survives all be it covered in trees!!

Lots more on mounds and mounts on David Marsh’s blog