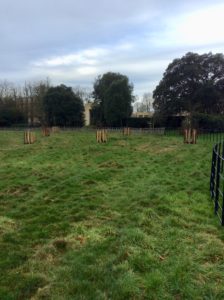 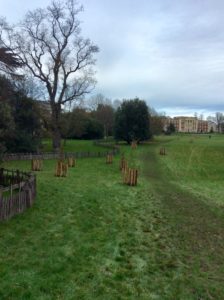 Trees are an important feature in any garden but are especially important in a landscaped garden such as Stowe.

Michael Hunt our tree specialist has spent his New Years’ day 2022 looking at the new trees planted in the Home Park, formerly the golf course at Stowe and he has sent this report.

On New Year’s day in the morning, I set off on my first tree hunt of 2022 to the landscape gardens of Stowe.  A new 9 hole golf course opened in May 2020 (this is the 3rd golf course since 1923) and is situated in parkland immediately adjacent to the Home Park. This relocation enabled the Western Gardens to be reinstated as Home Park.

This reinstatement of the Home Park is an exciting undertaking by the National Trust and enriches this lovely parkland with some splendid trees for the future.  These are some of the 20 species I encountered this morning:

Nothofagus Antarctica- Antarctic Beech. This is from Chile and was introduced in 1830. Interestingly this is one of the family Nothofagus that is one of the southernmost trees on the planet beaten by North Betuloides. They are 17 miles apart on Hornos Island the most southerly island off the tip of South America

Quercus Palustris- Pin Oak this from the USA

Celtis Australis- Southern Nettle Tree. This tree is allied to the Elms and introduced to Britain in the 16th Century, found in southern Europe where it can live for 1000 years, North Africa and Asia minor.

Ulmus Vada “ Wanoux”.  This elm a seedling of Ulmus Plantyn (a hybrid of the Exeter Elm and the Bhutan Elm) has shown to be particularly resistant to Dutch Elm Disease. It was introduced to the U.K in 2008 by the Hampshire and Isle of Wight Butterfly Conservation Society. It is part of the Dutch Elm Disease-resistant trials of new hybrids for use in the Conservation of the Butterfly White Letter Hairstreak. The caterpillars feed on the flowers and leaves of elm, especially The Wych Elm. 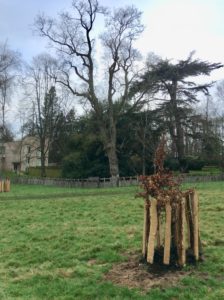 The photographs above show some  the new tree plantings in Home Park part of the former Golf course. In this third photograph the large tree to the left of the Cedar of Lebanon (cedrus libani) is a fine example of a Narrow Leaved Ash ( fraxinus angustifolia) and potentially a county champion.

Notes and photographs by Michael Hunt

The Bucks Discovery Museum, Aylesbury has an extensive collection of the early C19  drawings by Jean Claud Nattes of the Stowe landscape. There is also a booklet “Views of Stowe- drawings by John Claude Nattes” GN Gowing and G.B. Clark available for purchase from the museum shop.