Despite being close, the brothers were very much individuals and disliked being lumped together as ‘the Nash Brothers’. However, they were both important C20 artists and today are held in high esteem, primarily for their war commissions.

Paul was a painter of landscapes. He studied at the Slade School of Art (see A Crisis of Brilliance, Boyd Hancock) and was an official war artist 1917/18. In the 1930s he was influenced by surrealism and became a member of the ‘Unit One Group’ (which included Ben Nicholson). He was again a war artist in WWII and was also a distinguished photographer.

His brother John had no formal training but was also a war artist in 1918. (Both had signed up to the First Battalion Artists Rifles). His landscape painting remained closer to natural forms and he specialised in botanical subjects (Dictionary of Art & Artists).

Both brothers also used the wood engraving method of printing. They were both responsible for many iconic graphic designs, including book illustrations, fabric, wallpaper, and china. Probably their best known were the County Shell Guides and posters for Shell and London Underground (Design –Paul Nash and John Nash, Webb & Skipworth).

Wood Lane House is situated about 1.5 km north-east of the village of Iver. When it was built it probably commanded views towards Langley Park, situated less than a 300 m due east of Wood Lane, which runs north to south. Today (2020) it is a busy cut-through from the A412 (Uxbridge Road) to the B470 rather than the quiet country lane that the Nash family would have known. The revised edition of the 1932 6in OS map shows the house located approx. 400 m south of Five Points and immediately to the west of the road. To the front there is an in-out drive and a small building, a former coach house that may have been used as a studio (2020 now in separate ownership). To the north and east there are orchards and beyond this fields.

William Nash, their father, sold his London house in 1901 and moved the family to the country, as he hoped this would be beneficial to his wife Caroline. She died nine years later following many years of mental health problems, John and his sister Barbara were largely bought up by servants, including a governess who encouraged an interest in botany. The Nashes had roots in south Buckinghamshire where they had been yeoman farmers for many generations. The house was built for the family in a field; there had not previously been a garden. The gently rolling landscape of the home counties with its country lanes, sun-drenched fields, hedges, and trees was to become an important part of the brothers’ vocabulary (Design – Paul Nash and John Nash). To both of them the notion of place, the genius loci, was as important to their work as the landscape itself (RWA Exhibition notes).

The following description of the area is from Paul Nash

‘Our house stood on a gradual ascent on a level plateau at about the highest point of the heath. The road uphill was planted with all kinds of trees. At the top where it contracted slightly into a winding lane, only elms grew clipped and pollarded. The hedges on the left were thick and deep, but to the right between the narrow trunks of the elms, the strange procession of our boundary trees could be seen crossing the upland at right angles to Wood Lane.’ The procession was also made up of elms, but due to pollarding they looked like a different species. At the centre of the row stood three trees that stood out, their trunks merged together and their crowns formed a cascading canopy of leaves (he painted this group of trees, ‘The Three’, in 1912; they are now gone due to Dutch elm disease).

The gardens today are approx. 0.6 ha and consist of fruit trees, mature trees, lawns, and hedging (Rightmove 2018). Meandering paths lead to a tennis court and swimming pool; during the Nash’s time there had been a croquet lawn (Outline). There are far-reaching views across farmland. The coach house is now in separate ownership which means that part of the garden of Wood Lane House has also been sold, therefore the garden today is smaller than when Paul and John lived there. Paul wrote the following about his parent’s garden in Iver Heath: ‘the first place that expressed for me something more than its natural features seemed to contain’(Outline).

Paul always found a sense of mystery and enchantment in gardens and his paintings of them often had dreamlike qualities. In his autobiography Outline he describes what he called ‘the bird garden’ (he drew this and exhibited it at the Slade, private collection) from the morning room, which had a southerly aspect, a veranda and a corner window (depicted in ‘The Window’): ‘The garden was planted with a few flowering shrubs and trees, some clusters of daffodils and pheasant’s eyes but was otherwise un-cultivated. Each year the grass grew up and flowered and was cut down and made into haycocks. Thereafter it was an open space of meadow invaded to the sight only by the birds, by other small creatures, and by the shadows cast by the laburnum, the chestnut, the tall acacia and the little conical silver fir’ (the trees depicted in the work ’In a garden’).

During WWI, an area of the garden was used for vegetable production, as can be seen in John’s sepia ink drawing of 1915 which clearly shows brassicas being cultivated (Bucks County Museum Collection).

The artists as gardeners

Of the two brothers it was John who was more interested in gardening and undoubtedly his experience of the garden at Wood Lane influenced him in later years. However, it was not their garden, and it was not until he moved to Meadle, near Princes Risborough, and later Essex, that he cultivated his own garden. He subsequently produced botanical woodcuts, prints and illustrations, particularly for the Six Hills Nursery Catalogue.

Both Paul and John were inspired by the garden and painted it frequently, while they were living there or later either on visits to see their father during the war and after. The garden at Wood Lane House and its surrounding landscape featured in several drawings/paintings by both John and Paul. It was an ideal subject as they lived there during their formative teenage years prior to WWI. They both took their inspiration from the natural world, Paul concentrating on landscape and later John on botanical drawing. For both brothers’ trees were a recurring theme. Paul described the three elm trees in his parents garden: ‘they appeared to be hurrying along stopping and undulating like a
queue of urgent females with fantastic hats or a file of plumed serpents reared and on their tails’(Clear Skies exhibition notes)

Christine Kuhenthal studied at the Slade and as well as being an artist she trained as a dancer. She lived with her parents in nearby Gerrards Cross, where her father had built a ’woodland bower’ for his daughter. The house, ‘Forestholme’ (address: Woodlands, which runs from Oak End Way to Mill Lane, probably now gone 2020) was an Edwardian cottage set secretly among trees rather than a suburban villa which was the fashion in the new town of Gerrards Cross (First Friends). Dora Carrington visited the house as she did Wood Lane. By 1931 Christine’s father had moved next door to Haven Cottage and let or sold Forestholme (Kelly’s 1915/GX Street Directory). After her marriage to John she painted very little settling into a domestic role.

Paul and John’s sister lived in Bucks all her life, in and around Princes Risborough, and is buried at St Dunstan’s, Monks Risborough. In 1939, she was working as a gardener/nurserywomen with her business partner (Nora Hill) and lived at the nursery, ‘Nash Hill’ in High Wycombe, specialising in alpines (G.Twemlow/wikitree). Addresses: (1) Bitthaus, Great Kimble, (2) Trout Hollow, Bledlow
Road, Princes Risborough and The Holloway, Whiteleaf (also known as The Yellow House).

In July 1918, the Nash brothers rented a large shed (formerly used for drying herbs) from the herbalist Maud Grieve to use as a studio for their War Commission work. Iver Heath where they grew up being only a few miles from Chalfont St Peter, they knew the area well. John arranged for the War Office to deliver barbed wire, duckboards, gun chains, corrugated iron and other objects to The Whins to ensure authenticity and accuracy in their paintings. They found the barn too uncomfortable to sleep in, but they soon established a routine of working, with their easels back to back and their wives, Margaret (Bunty) and Christine, preparing food for them and keeping them
entertained by playing the piano.

The subjects they painted for the War Commission were harrowing and brought back the nightmare of serving on the front line. They had survived relatively unscathed physically; however, the mental scars took longer to heal. After they finished work at around 6pm they would allow themselves time to relax, walking and sketching in the Chiltern countryside. John worked on landscapes in which the shadows were long due to the late hour of the day, including ‘The Cornfield’ (1918), described as a poem in paint and now in Tate Britain, and ‘A Winter Scene’ (1920, Manchester City Gallery); the landscape depicted is still recognisable today as you walk across the fields.

It was a bohemian existence, and the couples were remembered in the village for their unconventional lifestyle. The barn still smelt of belladonna and henbane which lingered in the timbers and it was here that they carried out some of their best-known work. Paul started on one of his most haunting paintings, ‘The Menin Road’ (completed 1919), and John recreated his experiences in ‘Over the Top’ (1918), both now in the Imperial War Museum. Paul spent just six productive months at The Whins, before the brothers went their separate ways; however, John and Christine continued to live in the Chilterns for several years, later (1922) moving to Meadle as mentioned above (Maud Grieve).

Paul and John Nash’s significance for Bucks Paul Nash was part of a group of influential artists of the early C20 who travelled up to London to study at the Slade School of Art from the commuter belts of the home counties, including Stanley Spencer (Cookham) and Dora Carrington (Bedford), Mark Gertler, who lived for a while at The Windmill, Hawridge (see separate report) near Chesham, and Richard Nevison. John also became part of the group although he did not attend the Slade; Paul advised him that it would not help him develop an individualistic artistic style. Paul was twelve and John eight when they moved to Buckinghamshire and although both were sent away to school, they would have spent their long holidays exploring the countryside around Iver and both were sketching from an early age. They felt an attachment to the county and often returned in later years, initially to Wood Lane, where their father continued to live and to where they also brought their artistic friends, and after WWI briefly settling a few miles away in Chalfont St Peter. John developed a love of gardening and plant illustration. In 1976 he wrote that he had been drawing plants ‘for love or necessity for nearly seventy years’ (ref unknown). He lived at Meadle from 1922 until 1939 (see separate report).

Thank you to Sarah Gray for providing archive from this exhibition

The Nash archive is held by the Tate; however very little is available to view online.

Other relevant paintings by Paul Nash: 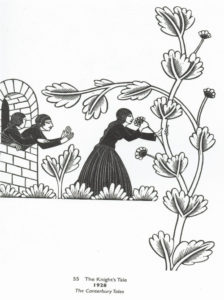 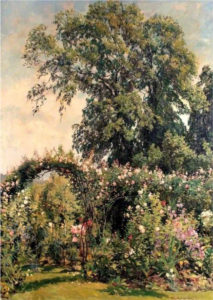 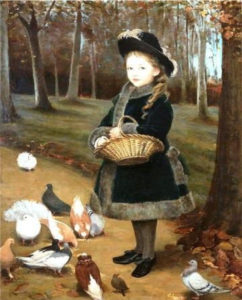