Cannan was a novelist and dramatist. He married Mary (a former actress) in 1910 after she was divorced from her previous husband, the author J.M. Barrie, because of her affair with Cannan. The Cannans moved in an artistic and intellectual circle and many of their writer and artist friends came to stay at the windmill or rented homes in the nearby villages. These included Mark Gertler, Dora Carrington, Lytton Strachey, D.H. Lawrence, Katherine Mansfield, Compton Mackenzie and John Drinkwater. Gilbert Cannan produced a lot of work during his time at the windmill and some of the other visitors referred to either the countryside or people they had met there in some of their work. Mark Gertler painted several paintings during his many visits, one of which, The Merry-GoRound, is probably his most famous work while another is his painting of the windmill itself, called Gilbert Cannan and his Mill.

The Grade II windmill is located down a track off Rays Hill, Cholesbury, a small hilltop village approximately 6 km north-west of Chesham and 5km south of Tring in the Chiltern Hills (AONB). There have been windmills on the site since the 17th century, but the current building was constructed in 1883 and an attached grain store was later added. The miller lived in the adjacent mill house until the mill ceased  operation in 1912. The property was occupied by the Cannans from 1913 to 1916. They lived in the mill house and converted the windmill, a former studio into a study, which they also used for parties (Petticrew and Austin, p. 126).

By 1936 the grain store had been modified and made into further living accommodation, but it is unknown when this work was actually carried out. It is believed that Doris Keane added to the windmill accommodation when she was living in the Mill House in 1917 (Sturgess).

During the 1930s the mill was used as an art studio and for classes by the artist Bernard Adams. Mary Cannan ‘decorated the walls of the circular living room with great flower patterns, cutting out and pasting up each flower, fern and leaf herself…’ and an artist friend also painted a frieze for them (Petticrew and Austin, p. 127). The current owner has extensively renovated the windmill and no trace of Mary Cannan’s decoration was found (Andy Wright, 2019).

Sales particulars from 1964 state that the mill house was originally two cottages and had been converted into one with an ‘old world garden’. The house had a frontage to the track of 90 feet and a depth of 200 feet, with herbaceous borders, rose beds, a pergola, mature beech trees and an old well. The windmill is described as a separate staff cottage (Hamnett, Raffety & Co). A previous owner of the Mill House (1968–1981) states that the mill and mill house were separated about 1963 and sold to different owners. They have been separate properties ever since.

In 1913, the garden at the mill house had already been planted by previous residents and Mary Cannan acquired part of a paddock adjoining the mill to enlarge the grounds. There is a square of garden that is part of the mill house garden today but is not shown as such on the 1949 OS. A courtyard was laid, and tubs planted with shrubs and flowers under Mary Cannan’s direction (Petticrew and Austin, p. 127). Apart from Gilbert Cannan and his Mill for which he studied and sketched the garden, Gertler does not seem to have been influenced by the Cholesbury garden. He did other garden paintings, but these were of Garsington in Oxfordshire, the home from 1915 of Lady Ottoline Morrell, his patron, and her husband, who represented artistic friends at their tribunals as conscientious objectors. He stayed at Garsington many times (Haycock, p. 224).

The land for the rear garden of the windmill was not acquired until the 1980s by the then owner, Sir David Hatch of the BBC.

Mark Gertler and the Windmill

Mark Gertler was born in 1891 to Polish Jewish parents who were extremely poor. He showed a talent for drawing and managed to win a scholarship from a Jewish charity that enabled him to enrol at the Slade School of Art in 1908. Here he met Paul Nash, Stanley Spencer, C.R. Nevinson and Dora Carrington among others.

In 1913 he met Gilbert Cannan who then invited him to Cholesbury on many occasions for prolonged visits, especially once the war broke out as Gertler was a pacifist (as was Cannan) and did not want to be in London (Haycock, p. 198).

During his visits Gertler painted several works including The Fruit Sorters, 1914 (Haycock, p. 183). This shows people with baskets on their heads containing apples and lemons. Neither the baskets nor the lemons are Bucks items so probably not inspired by his visits to the windmill, more likely by his contemporaries’ paintings of similar subjects. However, that year he did write to Dora Carrington, with whom he was having a relationship, that ‘Coming down here [Cholesbury] in the train was wonderful. The sunshine, the fields and the trees of the country fill me with vague longings’ (Haycock, p. 183).

In 1915 he started his windmill painting, Gilbert Cannan and his Mill. According to the Ashmolean Museum in Oxford where it now hangs, it took Gertler two years to paint it and he made many nature studies for it. It was first exhibited in London in 1916. It shows Cannan standing in front of the windmill with two large dogs, one of which had previously belonged to J.M. Barrie and is said to have been the inspiration for Nana in Peter Pan. The prominent tree on the right-hand side of the painting no longer stands but there is a large tree stump in the garden of the mill house that would appear to be in the correct place for the tree in the painting. The stump is of a mature conifer, not a horse chestnut as cited by the Ashmolean (Eustace, p. 32). It did not have a divided trunk as shown in Gertler’s painting, but he obviously used artistic licence as there are other anomalies. Gertler’s rendition of the building itself is not accurate; there is another door above the front door and a platform around the windmill between the two doors; the cottage attached to the rear of the mill (originally the grain store) extended equally to both sides of the mill at the time of the painting (it was extended again in the 1980s). Gertler shows a lower window on the mill which never existed.

The painting also does not show the steam engine that was to the right of the mill obscuring the view to the fields beyond. This engine was still in situ when the present (2019) owner bought the property but has since been removed. No photographic or written evidence refers to the pole-like trees on the left of the painting and it is suggested that Gertler put these in to counterbalance the tree on the right and because they form triangular shapes in common with the mill, the main tree and even Cannan himself.

Also dated 1916 is Merry-Go-Round which Tate Britain believes was inspired by a fair on Hampstead Heath near where Gertler also lived and worked from 1915 (Haycock, p. 219) (the painting is held at Tate Britain). Both the Mill painting and The Merry-go-Round were painted when he was trying a new modernist style of painting with bold colours and black outlines, not naturalistic at all. In 1916 Gilbert Cannan wrote his novel Mendel based on the life story of Gertler and his love affair with Carrington and many other people who had stayed at the windmill. Many friends deserted Cannan because of the book including Gertler (Haycock, p. 249). In 1918 the Cannans marriage broke down and Cannan had a nervous breakdown. He died in a psychiatric hospital in 1955 (Petticrew and Austin, p. 128).

Gertler also had fits of depression, especially when Dora Carrington left him for Lytton Strachey and he eventually committed suicide in 1939.

Gilbert and Mary lived at the Windmill for a very brief time during the first half of World War I (1913–1916). Although Gilbert was creative, he was not an ‘artist’ although Mary was interested in art, as her decoration of the living room walls testifies. It would also appear that she was a keen gardener acquiring an additional piece of land and laying out a courtyard garden.

The Cannans were part of the foremost literary/artistic circle of the period and the many guests who visited over the three-year period were hugely influential in their fields and would have appreciated the garden and surrounding countryside of the Chilterns in and around Cholesbury.

Sturgess, Jill, Notes on the mill house written by the owner from 1968 to1981

Many thanks to Ruth and Andy Wright and Linda Stacey for allowing us to visit their homes and
gardens and for providing additional information. 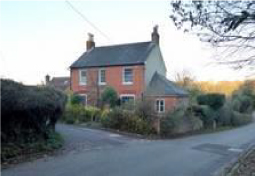 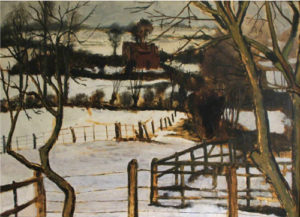