Anthony Foster was a sculptor, woodcarver and one of a number of assistants to Eric Gill in the1930s when Gill required help with commissions for a number of large-scale works for London Underground and the BBC (MacCarthy). He worked with Gill at Pigotts and abroad for seven years (Foster). He exhibited various works of woodcarving at an exhibition (Exhibition 20 by the Arts and Crafts Exhibition Society, 1946): all figures, some religious, ranging in price between £10 and £18, and a ‘St John the Baptist’ at The Royal Glasgow Institute for the Fine Arts 90th Annual Exhibition in 1951 (price £50) (https://sculpture.gla.ac.uk/).

Foster was responsible for the Crucifixion on the front of Guildford Cathedral, designed by Gill but carved in stone by Foster after Gill’s death. He also carved the Stations of the Cross in the Roman Catholic church of St Gregory the Great in Northampton https://stgregory.org.uk/), an unfinished Byzantine church by Sebastian Comper opened in 1954. (The statues were not commissioned by St Gregory’s but placed there after Foster’s death in 1957.) A stone font in Eric Gill style in the National Shrine of St Jude in Faversham (Kent) is also credited to Foster (www.stjudeshrine.org.uk/).

A crucifix now in the Frieth churchyard was given to a priest after he retired from Kilburn to Frieth (www.friethhistory.org/). The crucifix itself is now set in a brick exedra at one end of a modern graveyard extension and carries the following inscriptions:  ‘Rev. W.P.T. Atkinson MA St Augustine’s, Kilburn 1930–54 St John, Frieth 1954–58’; ‘Upon the people of Frieth and those at Kilburn who gave this cross O Lamb of God have mercy.’and: ‘Carved by Anthony Foster of Frieth commemorating the work of Fr. W.P.T. Atkinson in Frieth.’ There seems to be nothing of Foster’s work in the parish church itself, apart from possibly a stone plaque to Charles Alfred Cripps, 1st Baron Parmoor of Frieth, 1852–1941.

Foster’s son Peter was assistant to Ralph Beyer, another assistant of Eric Gill at Pigotts and a contemporary of Anthony Foster (MacCarthy). Ralph Bayer was given the commission for the important lettering in Coventry Cathedral (Coventry Evening Telegraph; Guardian). House and garden Hilliers, Ellery Rise, Frieth is a 19th-century house at the eastern end of Frieth, a small village in the Chilterns 7km south-west of High Wycombe and 6km north-west of Marlow. It sits in the front of its 65m long × 20m wide plot, at the north-east corner of Ellery Rise with the main village street. It was for some time the only house in Ellery Rise until a number of council houses were built on either side in a north-eastern extension to the village in the late 1940s. The house name is a corruption of the farm name that gave its name to the street (www.friethhistory.org/).

The garden is of generous proportions and is currently laid to grass with a circular path in the half nearest the house and with a vegetable bed along the northern side of the further part. At the foot of the garden is a well-built timber shed with plenty of windows, possibly used by Foster as a sculpture studio. The front garden is laid out with brick-edged beds either side of the path to the front door. The house was bought by Anthony Foster from Henry Nixey some time after 1947. The current owner bought the house from Foster’s children (pers. comm.) at an unknown date. It is not known what was grown in the garden. It is also not known if anything survives from Foster’s occupation. It is not obvious that the artist took inspiration from his garden: his work appears to be mostly of figures, many religious. 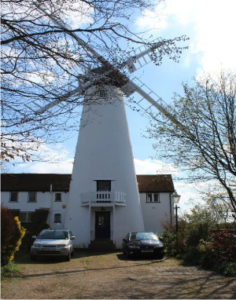