Josephine, Caroline (Car) and Mona were born into a military family stationed in South Africa and later, India, their grandfather Sir John Richardson had been a notable naval surgeon, naturalist, and Arctic explorer. The girl’s earliest memories were of an Indian garden, in Charata, a hill station in the north west Himalayas, to this they attributed their lifelong interest in flowers. Their father Willingham served in the Royal Engineers and sadly died in 1875, when their mother Elizabeth was pregnant with Mona, the family then returned to London.

Willingham’s brother, Major-General John Richardson was a watercolourist and renowned wood engraver, he created a portfolio of over 80 watercolours on his travels. The girls undoubtedly inherited his sense of adventure and artistic talent, they were well-travelled and educated to a high standard. Car studied art in Paris and qualified as a teacher at the Royal Drawing Society of Great Britain and Ireland. Josephine lived with a family in Japan for three years, her job being to teach them English manners and customs, she also studied Japanese art whilst in the country. She returned to England with a valuable collection of prints some of which are now held by the British Museum.

Josephine and Car first visited Amersham in 1906, where Jo who was employed as a lecturer in literature found the time to research and write. By 1910 Mona had married, Edward Voss and they built Ridge House, in Quill Hall Lane. It was not long before all three sisters were living in the town, at first Jo and Car stayed at a chalet cottage opposite Ridge House, known as the Woodhouse. 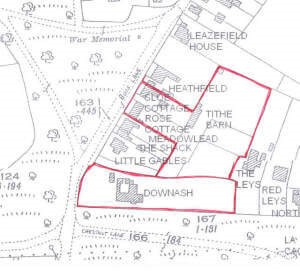 They soon started investing in property, they bought Lavender Cottage on Chestnut Lane and Hedgerow on Quill Hall Lane. In 1915 Car purchased Downash (now The Old School House) in Bois Lane, she had seen the distinctive brick and flint property from the bus and had no idea it came with a substantial field which contained a dilapidated barn, which later became Car and Jo’s home the Tithe Barn. Car extended the barn and renovated it to provide living accommodation and a studio. She also owned Sloe Cottage which she bought in 1929, this along with Rose Cottage which the family also owned are situated either side of an alleyway from which access can be gained to the barn, there is also a drive to the well concealed house from Chestnut Lane, adjacent to Downash. (Plan showing the properties owned by the Richardson sisters in Bois Lane, Chesham Bois, Bucks – Amersham Museum)

The Tithe Barn and its large garden became the centre of many activities and social gathering in Chesham Bois. The garden was at its best in spring with wonderful displays of snowdrops and daffodils, the sisters would put up a sign at the top of the drive inviting people to come down and view them. The garden was a former orchard and was full of cherry trees, which inspired many of Car’s paintings when they were in blossom. A bell in the trees was run regularly to scare off the birds, when the black cherries ripened cherry gathering parties were held at which everyone stuffed themselves with sweet ripe cherries. There was also an old quince tree in the garden which had branches propped up with poles, the tree was a beautiful shape and Caroline also included it in her paintings.

There was an apple store and a large shed in the garden, it was used to store trunks containing interesting souvenirs from their travels. The garden also had a well, now gone, which was used by the gardener to fill his water bowser, it features in several of the paintings/drawings. There was a large herb garden in front of the barn, Car enjoyed growing herbs, especially fennel they used them in cooking and medicinally in tinctures. (Authors note: I wonder if she knew Maud Grieve who was growing medicinal herbs in Chalfont St Peter at the time and who I wrote about in my 2017 book). The kitchen garden was very much the domain of their gardener, who was always known as ‘Buttercup’, the Richardson’s kept him in their employ even when he was too old to maintain the garden and the kitchen garden went into a steady decline.

Both Car and Josephine were active in village life and served as parish councillors. They were both early members of the Chilterns Art and Handicrafts Club, which was founded by the artist Louise Jopling in 1919 (See Amersham Women Artists 2 in the next issue). Both women were involved with the Red Cross and worked in various nursing roles during both world wars. Whilst she was working in the hospitals Car sketched over 100 drawings of convalescent soldiers.

Among her other subjects Car painted London scenes including historic events, such as the 1919 Victory Parade. She travelled around Buckinghamshire and painted picturesque scenes, in the run up to World War II she was commissioned by Bucks Archaeological Society to draw buildings of historical interest threatened by destruction, 38 of these were donated by Car to the County Museum. These included watercolours of Old Amersham (some of which show the annual charter fair) and Chesham. Another commission during WWII, possibly from the Ministry of Defence was to draw windmills across the country, this enormous collection is still held by her family.

I am most grateful to Alison Bailey and Emily Toettcher at The Amersham Museum and Tony Voss (Mona’s grandson) for their help with this project. 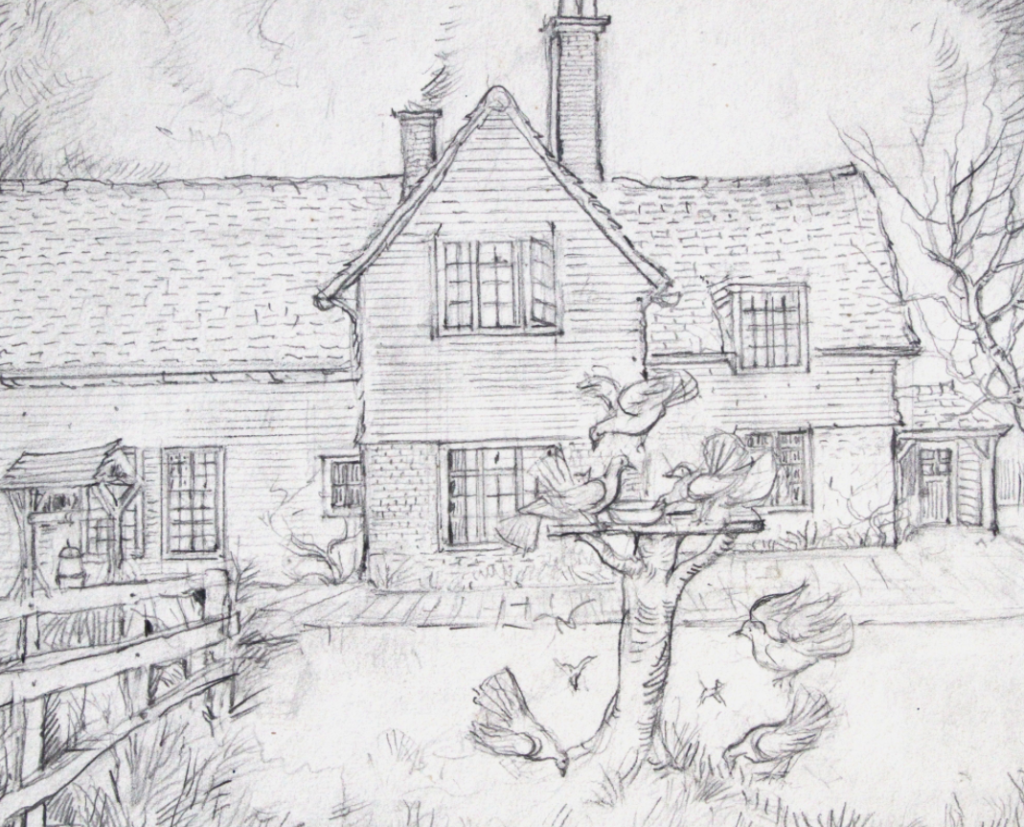 The Tithe Barn by Caroline Richardson